Introduction of complete and honest review of desktop 3D Printer Kit: DeltaMaker. At first glance the DeltaMaker may appear rather Spartan and minimalist among printers with apparently more sturdily designed casings. It is this sparsity of the carefully designed outer façade, however, which makes the Deltamaker 3D printer one of the most user-friendly 3D printers on the market. Tough and portable, it is the answer to all of your individual printing needs and couldn’t be simpler to use.

Setting up the Deltamaker 3D Printer couldn’t be easier. The user simply unpacks the printer, positions the magnetically attached acrylic build plate in the frame and plugs the printer in. Once you have accessed the OctoPrint log-in, utilised the auto level function and loaded the appropriate filament, all you have to do is start printing from the browser of any device.

The beauty of the Deltamaker 3D printer is the manufacturer’s diligence in making the machine’s use as user-friendly as possible. Even the slicing settings, which are built in, are meticulously pre-configured to work with CuraEngine software making nearly invisible machine layering possible from the Get-Go. For accuracy, Bridging, Backlash and tolerance this printer is at the top of its class. 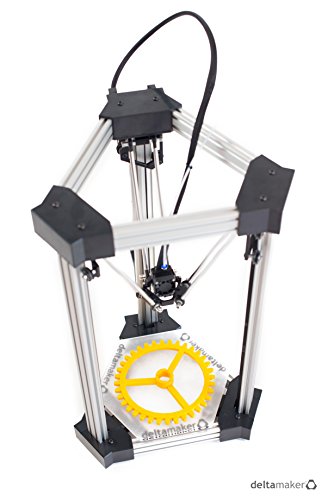 The Raspberry Pi circuit-board, tucked away inside the base of the Deltamaker’s elegant aluminum frame ensures the printer is compact and lightweight while still having the power and speed of its competitors. It’s Fused Filament Fabrication (FFF), employing a 1.75mm PLA Filament for 100 microlayer resolution capability make the Deltamaker accurate, reliable and fast: up to 150mm a second extrusion.

The open design of the build frame allows for 360° inspection of printing in progress which allows for group inspection and presentation of work in planning and means that the printer is clean. The Aluminum frame is tough and lightweight since the Deltamaker 3D Printer is designed to be totally portable and easy to install and operate. This printer can be taken anywhere and set up in minutes for client meetings and tutorials. Simply install the hexagonal build pate, plug in and off you go!

Because the Deltamaker, unlike other 3D printers, uses three moving arms to locate the extruder over a static build plate the moving parts of the printer are much lighter and therefore faster and more accurate than other printers in the Deltamaker’s class. There is elegance to the movement of the robot arms which the developers encourage users to put on display for all to see. This technology is taken from a Swiss design which was developed for mass-production installations in other mechanical fields.

Its build volume is 260mm Z axis on a 240mm wide, hexagonal platform allowing for taller prints than many other printers. The temperature control enables accurate adjustment for optimum extruder performance. Untethered printing means that the Deltamaker 3D Printer is easily accessed for networking and usable straight out of the box. The OctoPrint user software and CuraEngine slicer work perfectly with the printer from the very start due to the precise pre-configuration by the manufacturer which makes the Deltamaker 3D Printer the best printer to use with OctoPrint 3rd party software.

Conclusion
The Delatmaker is marketed as a personal 3D printer but the applications for such a portable machine are wider than this. For teaching and consultation purposes it is ideal because of its portability and quick set-up attributes. It certainly is different to other 3D printers but those differences are its strengths. For a portable, user friendly device you need look no further.

Compare this desktop 3D Printer with others products reviewed on our website, go here.